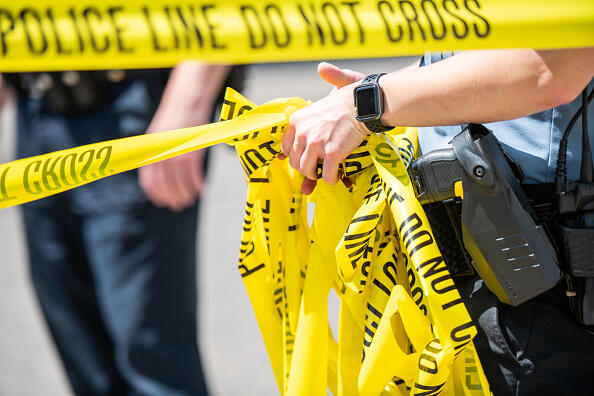 Floyd Mayweather's top business associate took the time to sit down and write up a proposel for new police reform in the hopes of suggesting a solution that could help fix the current system.

Brent Johnson is the CEO of One Entertainment who also has a law degree.

Johnson has drawn up a 6 point document titled, "Amendment Proposal for American Police Policy Reform" which lays out his plan.

Policy reform is the process of examining existing laws, and advocating and implementing change in the way that a system operates, usually with the aim of enhancing justice or efficiency. Most law reform bodies carry out research and recommend ways to simplify and modernize the law. We are using a lifetime of experience and the experiences of others around us as the research to keep people safe and to stop the killing and victimization of black and minority citizens in our country. These Amendments might be naïve in some regards but thoughtful in others but the beginning of change is admitting to a problem that needs to be fixed. If even portions of this document reach someone with the power to engineer change, then the writing of this document was worth the time to draft.

AMENDMENT 1 – Zero Tolerance for Racial Bias and Violence Against Minorities (5-5-5 Plan) Internal affairs will have a policy that any officer in his career that has five (5) confirmed incidents involving racial bias to be proven by the vote of a community policing committee. A finding of racial bias for all five (5) incidents within a five year period will trigger a nationwide ban on employment in law enforcement in any precinct in any state or federal employer of law enforcement. Each incident will trigger a thirty-day sensitivity training class that meets two times per week for 90 minutes for a 12 hour class.

After the 2nd incident, the class is a sixty (60) day class for 24 hours and from incident 3-5 the class is ninety (90) days for a total of 36 hours of class time. The incidents are removed from record if after the training, there are five (5) years of incident free policing for each incident that the officer is found guilty.

Incidents that are unanimously voted by the Zero Tolerance Committee to be non-racially motivated shall be removed from the record and not affect officer status. Status cannot be avoided by changing jobs, the 5-5-5 plan is set to be adopted by police officers nationwide to be effective.

In order to enforce this zero tolerance policy that removes an officers right to be an peace officer, an ironic title at times, thee following establishments need to be set up in every state:

2. Training Component: A racial sensitivity curriculum that is tailored to creating more inclusive thought and removing bias in the police force.

AMENDMENT 2 – Racial Representation In The Police Population (The 70% Rule)

In city areas with a high concentration of African-American citizens, there must be at least 1 AfricanAmerican police officer in every patrol car in partner situations and no white officer can ride alone in policing an African-American community. If seventy-percent (70%) of the population of a city or neighborhood is African-American, then 70% of the officers serving that community must be African-American.

The same policy should apply to Hispanic communities except further, 70% of the officers should speak Spanish in those communities even if they are not Hispanic.

All officers for every stop should identify themselves by first and last name and badge number in the following format as step 1: “My name is officer John Smith of the 1st Precinct, badge number 123.” Further, the officer should identify immediately, the reason for detaining, investigating, or approaching a citizen, plus allow a citizen to record their identification as per AMENDMENT 4.

AMENDMENT 4 – Right to Record Officers shall remind citizens of their right to record all interaction with every officer and say verbally, would you like to record this conversation and wait for them to get their recording device, FaceTime, or recorded video set before continuing with the stop. An Officer has to 100% get a verbal answer that the citizen does not want to record before proceeding. This doctrine will also identify those that have something to hide and therefore citizens that choose to film are not likely to be threats because they are not likely to want a video that would create irrefutable proof of guilt to be available to incriminate. To protect, officers as well as citizens, once filming has begun, if a criminal contraband or other evidence is found. The citizens recording is evidence. Even If the officer is wearing a bodycam, Citizens have a right to film interactions with law enforcement and being a member of law enforcement immediately makes them waive their right to consent to being filmed so there is no possibility of an officer not allowing filming of their interactions with citizens. If something about an interaction with a policeman is unsavory or worthy of reporting, public and private uploading locations for videos shall be provided for community policing so that videos cannot be hidden, deleted or suppressed. Officers reports will have check box that says, did you offer the citizen the right to record the interaction with you. If the officer is being recorded, he has a duty at the beginning of the video to identify himself in the manner outlined by AMENDMENT 3.

AMENDMENT 5 – No Consequence for Refusing to Allow Unwarranted Search and Search Reform The comment is made often by law enforcement. “Do you mind if I search your vehicle?” The average law abiding citizen unknowingly or knowingly waives his right against unwarranted search very quickly. The recital should change and read as follows: “You have the right to refuse and there will be no consequence if you refuse, but I would like to search your car based on the following factors. I am presenting you with my reasons and they may open further questions which I will ask directly and to the point. If you answer these questions appropriately, then you can be on your way but if I feel that you are answering them deceptively. I will be searching your vehicle and providing you with a statement of search that are free to take to the precinct for review of sufficiency.” For every search that does go forward, prior to the search, a form the exists in triplicate will be filled out and filed by the officer at the end of his shift. A copy will be given to the citizen and it will be subject to automatic oversight or a hearing that is called by citizen that feels that the search was in violation of his or her rights and was influenced by racial bias or other unlawful premise.

AMENDMENT 6 – One Phone Call Rule Extended to Traffic Stops The Citizen will be allowed to make one phone call in the presence of the officer. That Stop may be to a legal aid service, The public defender’s office hotline, community legal aid, Family Member, Congressman, City Official or District Attorney Resources. Every municipality seeking to implement the Amendments shall cause organizations in its control or affiliated to make 24-hour resources available for the assistance of protected classes of citizens for which the statute was attended. Citizen may opt to have the contacted individual communicate on the citizen’s behalf if they feel that they will communicate to the betterment of their situation and have greater understanding of the law, their rights under the law and ease fears or apprehension that may be created as a factor of a custodial stop or traffic stop that is going to be escalated past a simple traffic citation and issuing of a ticket or other notice.

PURPOSE OF THE AMENDMENTS

These six amendments represent an attempt to change the way that policing is done in places where contact with police by African-Americans is having increasingly lethal and increasingly dangerous outcomes unnecessarily. The trending topics of choke-holds and lethal force are actually omitted from this document purposely because the culture change that these six tenets strive for is to upgrade the individual experience with police by changing the system because I have read the use of deadly force provisions in laws and the “stated” police procedure and that is not where the problem lies. The use of force is only to be exercised when the officer’s life or those of his fellow officers is in danger and when deadly force is being used against the officer. That policy as a statement is perfectly fine. Equally, the use of bare choke holds and other aggressive tactics are the easy target and there have been widespread bans on them but isn’t the problem that prior to effective de-escalation tactics being utilized, gestapo tactics are far too quick to be used which lead to the gang tackle melee style policing that is all too familiar. The essential problem is in the perception that the officer’s inherent bias creates of the people that he is charged with policing. This means that the only change is practical and steps driven to create full-scale change that is systemic and that creates consequences and accountability. With this implementation, I feel that steps like the ones that I am proposing will make it harder for racist, bigoted and hateful officers to find a home in law enforcement so that the deadly force and choke hold tactics are a thing of the past because better members of the human race will working in the police departments of our country with a superior system of governance and a slightly better plan for how to prevent the killing and the lack of amicable contact between police and citizens. This was created to create change, even if not a word is read or a suggestion taken, I pray that someone greater than I, is inspired to create the better way that can help the most people to be safe in a world that is unkind and downright hostile towards us merely because of the color of our skin. Black lives matter and the work is not done.